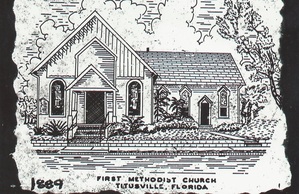 In 1865 a group of devoted Christians formed this church in the home of Sara and Joseph Gruber on Mendel Lane. Ten years and nine children later, 1875, First Methodist Church was founded as a Mission Circuit by Rev. R. H. Barnett at the request of Bishop Wightman.  Our first pastor was Rev. A. A. Barnett, nephew of Rev. R. H. Barnett. Pastor photos can be seen in our Library/Archives in Fellowship Hall.

$600 and fund raisers made it possible in 1889 for the first church to be built on a lot near the cemetery, located where Dr. Laing’s office used to be and close to the present Gate Service Station on Garden Street.  On December 29, 1889, the first services were held in the new church.  Photos of the church can be seen in the Archives.

In 1903 the cornerstone for the present Sanctuary was placed and in 1956 the church was completed.  To the right as you enter from the Narthex were grand arches with screened doors to allow for summer breezes and light to enter the Sanctuary.  Many services were heard with the doors open and chairs filling the courtyard from the overflow of parishioners.

In 1962 First Church commissioned 50 parishioners to start the Indian River City Church and, in 1967, more were sent to start St.
Andrews Church.

Our congregation gave from the heart, in contributions, to furnish all that you see before you: the organ and pianos, the choir chairs, baptismal font, communion table, communion rail sections, pulpit, lectern, and much, much more. 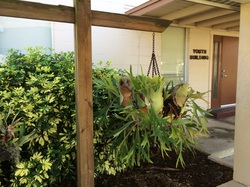 The cornerstone was laid in 1949 and completed before June.  The building was named Hennessey Hall.  An old barracks was purchased from the Island, possibly a Coast Guard Barracks, and placed in the present court yard.  It was fondly referred to as the “Chicken Coop.”  This housed the Sunday School Classes and was later demolished. In the early 70’s the hall was remodeled.  In 1999 our present Youth Building was re-carpeted after having undergone many years of wear and children.  Originally this building was used for church offices, a library, nursery, adult class rooms, and meeting hall.  It is presently used for Youth Sunday School classes for ninth through twelfth grades, youth meetings, Bible study group, and houses our very own Congregational Nurse. 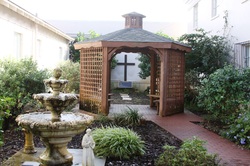 This beautiful garden originally maintained and landscaped by Brigette McKnight and now by a landscape committee, originated as a dream of Polly White but never came to fruition. In 2000-2001, contributions from various committees, under the direction and tireless efforts of Brigette McKnight, bricks were sold, statues purchased, and plants and benches donated to finally brought Polly’s dream to reality.  A gazebo was donated by Jan Lichtenwalter in 2008 in memory of her husband, Rev. Tony Boyles.  In 2011 the Trustees approved using the back section of this memorial garden to inter cremains according to approved guidelines.  Donations accompanying the cremains are used for upkeep of that area.

Main Street Annex (across from the Education Building)

The Methodist Episcopal Sunday School was formed in May 1888 and continues on.  Our Education Building was built in 1963 at an approximate cost of $75,000, and is used for Sunday School Classes and a Preschool with VPK (Volunteer Pre-Kindergarten).  The Preschool was established around 1970 with both Kindergarten and preschool evolving.  Our preschool program closed due to many factors in June 2017.  The Education Building is now used for our Sunday School classes.

This building was originally a Winn Dixie Store.  It was purchased for about $98,000 and was renovated in 1967 and 1968 to accommodate church staff, classrooms, kitchen, a music room, and a meeting hall.  The church library was moved here, along with the historical archives. 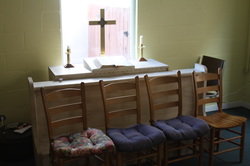 This chapel was placed in memory of Grace Lee, who was the wife of Harry Lee, Associate Pastor in 1972. The chapel is located in the Youth Building.

Not much has been recorded about the library.  It is known that it was transferred from Hennessey Hall in 1968 and remains in the same area.  The archives were a pet project of Ken and Jan Howe and in 1999 they were given permission by Trustees to incorporate it into the  library.  Roof leaks in 2009 damaged some archival materials and had to be discarded.
The hurricanes of 2004 created a lot of damage to roofs and to the Fellowship Hall.  Insurance payments enabled us to put new roofs on the Youth Building, Sanctuary, and Fellowship Hall.  The Fellowship Hall floor was flooded twice and quickly cleaned up. However, a year later the tile glue began seeping through.  Three layers of tile had to be removed and a new floor put down.  A new drop ceiling was also installed and the Hall was repainted.

The Space Center began layoffs and terminating the Shuttle Program, which made a huge economic impact on our community.